If you can find time, do go to Jorpati to visit Goma Dulal who has just got an electric trolley to help her move about.

I first met Goma 16 years ago, when the Spinal Injury Rehabilitation Centre was being established at the Khagendra Nabajiban Kendra precincts in Jorpati. Capable of speaking but motionless other than the ability to move her hands, Goma was resident of the next-door facility known as the Ryder Cheshire Homes, which housed differently-abled people.

Goma was always there to provide encouragement and good cheer to our fledgling organisation, which she and others began referring to simply as ‘Spinal’. After about five years, ‘Spinal’ moved to Kavre, but Goma has always followed our progress keenly.

She was born in 1968, the second of five siblings, the eldest being a brother. When she was about 10, Goma began experiencing difficulty standing or walking. Her mobility worsened progressively, but the hospital only gave palliative care. The elbow and knee joints started swelling, and before long Goma was confined to bed.

It was only in 1990 of orthopedic surgeon Ashok Banskota diagnosed Goma’s condition as Multiple Rheumatoid Arthritis, where there is no prevention, nor cure, only ‘management’.

Banskota lobbied and found Goma residency at the Ryder Cheshire Homes, where she has lived for two decades. As the disease progressed relentlessly, Goma was moved from wheelchair to ‘wheel-bed’, a kind of trolley meant for those who cannot move, only lie supine. All these years, she relies on others for bodily care, to be wheeled in and out, and to be fed. 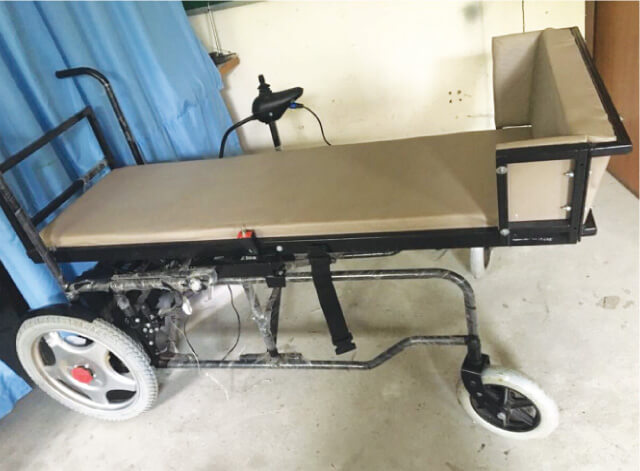 Goma’s mother has been gone now for a decade, her father died five years ago. Since then contact with her brother and sisters have been sporadic, and limited to phone conversations which requires a friend to secure her cellphone on the pillow to Goma’s ear.

Her body is hard as rock, the limbs little more than bone and skin. And yet in Goma’s eyes there is a shine and a sweetness in her tongue. Her refuge is music on the radio.

One of Goma’s most prized moments was the concert by Amrit Gurung and his folk-rock band Nepathya at the Khagendra Nabajiban Kendra compound. Goma looks forward to Fridays to hear the singer and lyricist Kumar Poudel, who volunteers his time to entertain the residents. “I would die if I did not have music in my life,” she says.

The last four decades have weakened Goma considerably, and the one-size-fits-all treatment of residents does not do justice to her growing needs, including a specialised diet. But what has bothered her most is her decreasing mobility even in her manual trolley: “I have to shout for someone to move me, and it is frustrating that help is not always available.”

A year go, Goma asked her friends from ‘Spinal’ in Kavre to get her a bijuli trolley with a joystick control. “I am tired of asking help to be moved in and out,” she told them. They ordered an electrical trolley, with battery, motor and steering from India, and it has now cleared customs, undergoing tests, and will soon be in Goma’s hands.

Goma prizes her moments with visitors and she likes making new friends, learning new things. Her spirits are high, even as her body gets weaker. Do visit Goma Dulal in Jorpati. She will be wheeling herself out in her newly acquired bijuli gadi to greet you.